Our engineering team recently had a general salary increase to keep pace with the market and maintain our 8-year streak of no voluntary turnover. Read on to discover why we started this process and how we did it, relying on our friends from Manfred along the way.

We have known the Manfred team for years. Not only because we are contemporary startups in a very small entrepreneurial ecosystem, but we have also been their clients on several occasions.

At marketgoo we are very aware that it is increasingly difficult and expensive to hire. It’s a hot industry topic, and one of the main issues that tech teams are facing globally.

In this case we had a head-start: there has been no voluntary turnover in our engineering team for the past 8 years.

But we know that the effervescence of the market, together with COVID-geddon, is the perfect breeding ground for increasingly attractive offers which are difficult to reject, since they include higher salary ranges in addition to the commodified perks: remote working, freedom of schedules, extra days off, etc.

A startup tends to bet on people who will in turn bet on the company in the long term, even if this sometimes means lowering their salary. It’s an act of commitment to the project and to the team.

After the first few years of tightening our belts as in any bootstrapped startup, marketgoo has been growing well for many years now, with an approximate 40% annual profit.

This year seemed then to be the right time to settle accounts with those who trusted us and go for a critical point in the pillars of EOS Life that mark our culture and that were not being fulfilled: «being compensated appropriately».

How it went down

As it should: guided by data rather than just “anecdata”.

Desk research was of course done to understand the current climate in terms of job offers and talent pool that were comparable to the profiles and roles we usually work with.

However, we knew that was hardly enough. So we worked directly with the fantastic Leo Poza from Manfred to obtain primary data regarding the situation of the market for technical talent.

An important element of this story is the transparency with which we strived to communicate this process internally. We polled our team members about the offers they’ve received, the salary ranges of those offers and, above all, what they found attractive about them.

No way to meet the needs of your team if you don’t actually know what those needs are.

The result of that poll? The offers that team members considered compelling did not have substantial improvements beyond salary. It was clear, therefore, that it was a matter of money: the team considered that they could and should have higher salaries given the current market.

As you may know, we have a self-proposed salary process available to the entire team. Anyone can start it on their own whenever they want if they feel that their compensation needs revision.

So why didn’t we resort to this mechanism in the first place?

Well..it seemed that our team members were being conservative in their salary ask, so as not to undermine the growth of the company.

They were aware that a general salary increase would signify an important financial effort for the company, and preferred to stay on the “safe” side.

So being very aware as we were of our salaries being less than market rate, we decided to unilaterally launch a salary improvement process, without preventing anyone from starting the salary self-proposal exercise if even after this general raise they felt unsatisfied.

Looking at the Numbers

Our salary ranges were lagging behind the market, especially in senior roles, which were almost 28% below market.

With the general adjustment that we applied, these differences have been minimised, as seen in the chart: 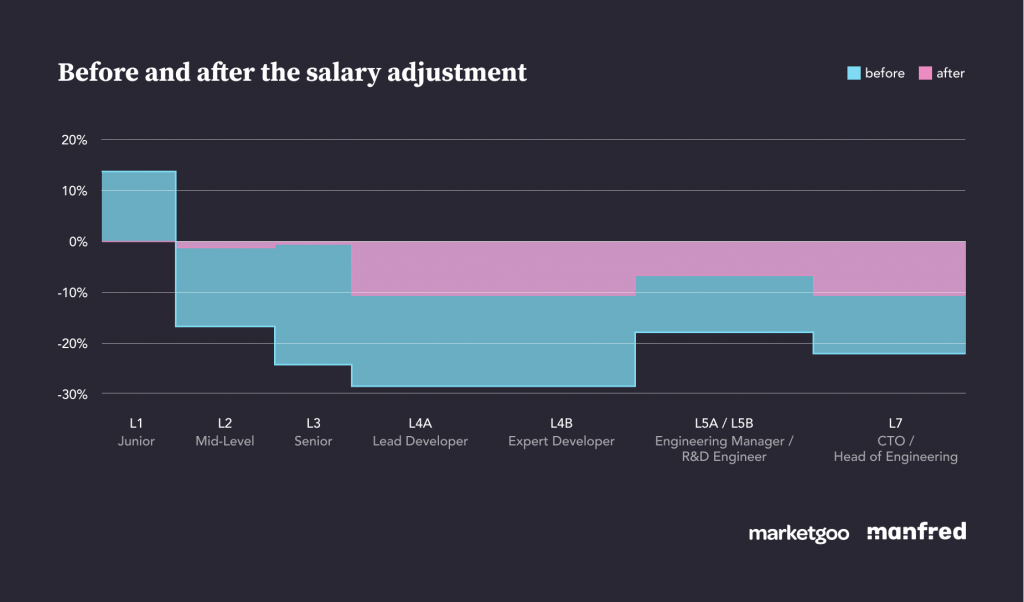 As you can see, as we climb up the ladder, a widening gap in the salary ranges becomes evident.

This is intentional, as this initiative only affects the fixed component of salaries. There is a part that is variable and that is not contemplated here.

As mentioned before, we always bet on the long term, and that’s why our team members have a variable pay component which is tied to profit sharing.

Currently, 15% of profits are distributed every 6 months among all members who have been with the company for more than 2 years.

This 2-year vesting period is virtually impossible to apply to someone joining as a junior, as after 2 years they are unlikely to remain a junior in marketgoo.

That is the reason why in the initial sections of the ladder the salary ranges are more adjusted to the market, but in the higher ones, which receive more variable weight, there are more differences.

During the last profit sharing round, senior roles got around 5000€ (on a bi-annual basis), while R&D profiles reached 8.000€, totalling about €16k per year.

If we add the variable amount to the equation, we can see that the chart changes considerably: 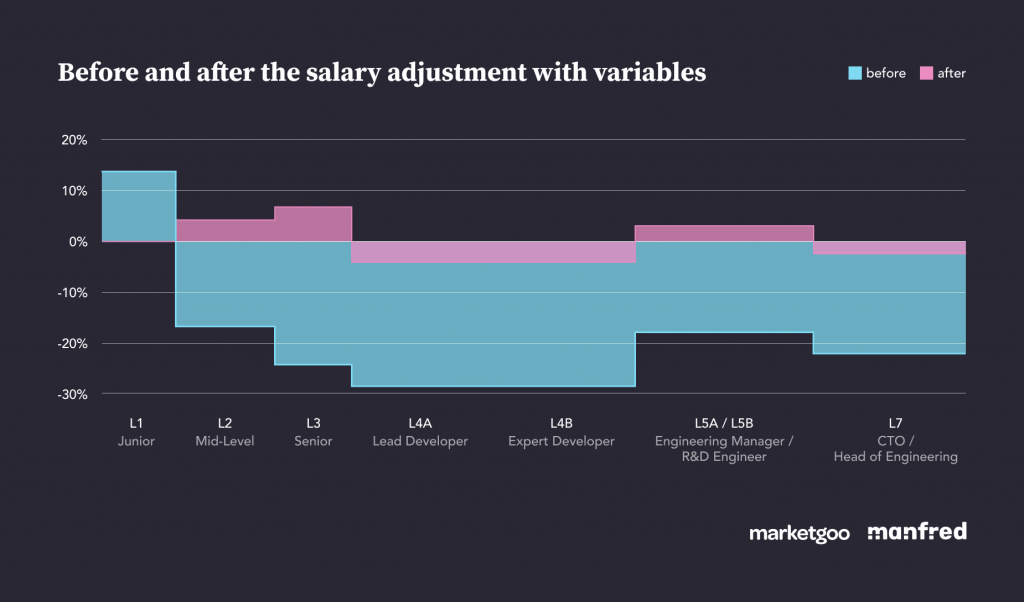 With the new salary ranges and profit sharing, the entire team is within -4% and +6% of the market rates. Let’s go over the direct financial impact this initiative had on the team.

Impact on the Team

The main objective here was to improve the team’s compensation.

For example, a senior role that earned €40K would now go up to €50K. In addition, in some cases we offered higher increases due to the impact that some members had been contributing to the company for a long time.

This is the average raise at each level:

In addition to the general increase, there are other promotions in the works: 4 people between October of this year and January of next year will increase their base salary by 10%, two of them will be joining the profit sharing program, increasing it by another 10%. Others will be promoted in January 2023.

Impact on the Company

The most direct impact is the increase in personnel expenses, around +14% due to the salary increase.

The indirect impact is more distributed.

On the one hand, profit sharing has been reduced by around 9%. This is understandable: if personnel costs are increased, profit is reduced. This decrease is small compared to the improvement in wages.

On the other hand, it means long-term savings. Hiring is difficult, and it is still a considerable investment of time and money.

It is estimated that each employee retained saves more than €20K in expenses and time spent hiring a replacement and re-onboarding from scratch.

So in the end we would have to pay the new hire the same as if we had increased compensation and retained someone who was already on the team.

Many of us are used to hearing advice that the safest way to get a salary bump is to switch companies.

In fact, there are articles that say that the maximum salary increase you can receive in your current company will be around 4%, but if you change jobs, this percentage will be closer to 5.3-11%.

However, at marketgoo we want to change that mindset, and show there’s another way. By giving everyone on the team the possibility of directly and openly discussing salary in dedicated spaces, we foster an environment of trust, freedom, and ownership.

We considered this a win-win approach. The team members appreciated the initiative and those who may have considered moving on for financial reasons have ruled out that option.

The managers, for their part, are calmer with the team being well compensated and knowing that marketgoo will carry on making efforts so that the team continues to develop and grow.

We couldn’t have done this without help from the Manfred team, who have a track record of adding value to marketgoo not only with recruiting, but by understanding how we do things and helping us reinforce and showcase our culture with projects just like this one. 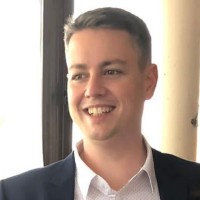 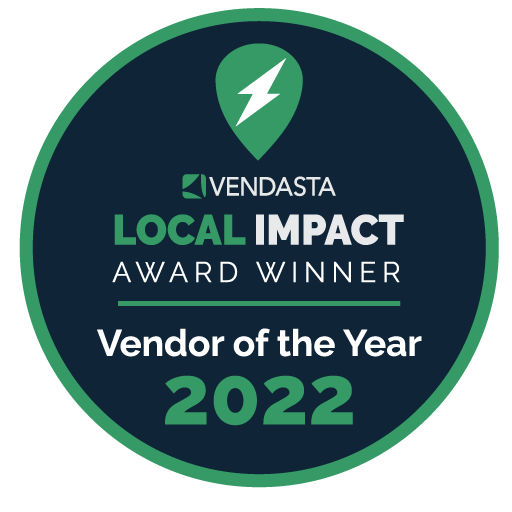